This Canadian singer-songwriter may be regarded as a “one-hit” guy, but he runs deeper that that. With a silky voice in the Melodic Rock genre, he is probably best known for his early 1980s song, written my himself and Elizabeth Janz, “Close My Eyes”

Paul Janz (born 1951) is now a Canadian theologian, and formerly a prominent  performer of pop rock music in the mainstream and contemporary Christian markets. He is known for other such hits as “Every Little Tear”, “Go to Pieces”, “Rocket to My Heart”, “Stand” and “I Won’t Cry”.

Send Me A Miracle

Born in Three Hills, Alberta, the son of a Mennonite Minister, Paul Janz moved to Balen, Switzerland with his family when only four years old. His earliest musical influences were  gospel and choir.

He became an established singer in the church choir by age 10 and was
writing gospel arrangements.  By the time he was out of high school, he’d taught himself to play guitar and drums. He was also studying opera with the Basel Conservatory of Music, which led to conducting and arranging assignments with the Basel Symphony.

At the Conservatory Paul started his first musical group in the early 1970s with his brothers called Deliverance.

It was inspired by his gospel-music upbringing plus his passion for roots rock such as Elvis and Carl Perkins. The band recorded three albums over the course of 10 years, topping the charts in Germany.

Running into financial difficulties, Janz left Deliverance and returned to Canada where he found work doing various projects for commercials. He enrolled in Simon Fraser University in 1981 to study philosophy.

With his passion in life still music, and still determined to make it in the business, he found time to record some demos, playing all the instruments himself.
The demos caught the attention of several major labels, and in 1984 he signed to A & M Records.

It would achieve gold record status in Canada. It’s debut came in mid ’85 and was met with critical praise. With production assistance from Lindsay Kidd, it featured cameos from Jim Vallance, Tom Colclough and Robbie King, and no less than four singles were released. The success of “Don’t Cry Tonight”, “Close My Eyes” and the title track shot the album up the charts.

But it was the smash “Go To Pieces“, with it’s driving rhythms and mixing that showed off Janz’s emerging productions skills and truly propelled him, helping earn the songwriter a Juno Award for most promising male vocalist.

The bulk of the next album was recorded at Godin’s Vancouver studio over the next year. Now with a deal with A&M’s division in the US, ELECTRICITY hit the stores in the summer of ’87 and again was met with instant critical acclaim. 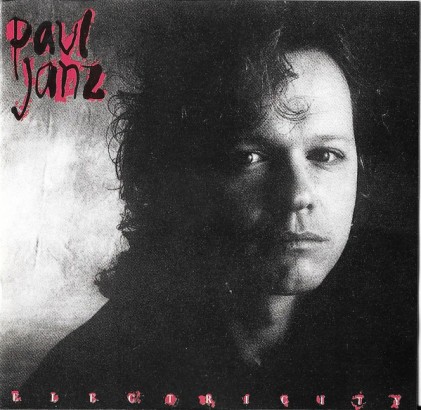 Produced by Janz with helping hands from the likes of Bob Rock (Payola$) and Mike Fraser in the mixing and featuring the lyrics of Pamela Phillips Oland, the album quickly gained Janz recognition as one of the country’s finest new songwriters, as emphasized in the first single “One Night Is All It Takes“.

Despite achieving great success in Canada, his U.S. record label’s restructuring of its roster of artists led to the end of promotion in the American market.

Janz’s final project, Trust, which was recorded under a co-partnership with the Attic Records label, continued the same ground-breaking tradition with Janz’s trademark lyrical compositions and driving melodic rhythms. Since that time, Janz hasn’t released any new material.

In 1989 Songwriter was released, an album distributed by the publisher, Irving Music of Canada, to promote Janz’s songs to other artists and producers, not intended for commercial release.

Janz dropped out of the music scene completely in the mid 90’s, when he began working towards his undergraduate degree in philosophy from Simon Fraser University. In a sense, he then returned to his pre-musical roots when he
pursued theology studies at the University of Cambridge. In 2000, he began a four-year stint at Trinity Western University in Langley, BC as Assistant, then as Associate Professor of philosophy and religious studies.

He joined King’s College in London as Lecturer in Systematic Theology in January 2005. Since beginning his return to a more religious self, he’s published a number of articles, taking a contemporary view on modern theology, specializing in the field from the late 18th century, on.

Prior to retiring, he was the Professor Emeritus of Philosophical Theology and Head of the Department of Theology and Religious Studies at King’s College London. He formerly taught philosophy at Trinity Western University in Langley, British Columbia and has written a book entitled God, the Mind’s Desire: Reference, Reason and Christian Thinking[ published by Cambridge University Press. In 2004, Janz’s first album High Strung was re-released on CD for the first time by Escape Music in the UK.

More recently, he has launched a new brand, Transformation Theology, a re-make of Bonhoeffer’s grass-root theology.

His son Chris Janz was a recording artist and GMA Canada Covenant Award winning songwriter and Covenant Award-nominated producer, but tragically he passed away on December 14, 2016.

“Believe in Me” also reached No. 25 on the U.S. Billboard Adult Contemporary chart in 1987