According to Billboard, this self-described “rock and roll band with horns” was the leading US singles charting group during the 1970s and had a steady stream of hits throughout the 1970s and 1980s. Fusing brass and jazz with a soulful rock and roll feel was their M.O.

Four of the founding members of the group contributed greatly to its unique, identifying sound: James Pankow played trombone, arranged and lead the horn section; Terry Kath was the group’s leader onstage, and for many longtime fans, its musical soul; Kath’s vocals mark a band signature and his electrifying guitar work was unsurpassed; Robert Lamm played keyboards and wrote a lot of the hit songs; Peter Cetera became a writer of some of their later big hits and evolved into a later “signature” voice.

Rather than duplicating a lot of well documented information about this group’s entire story, here is a shorter version of how they got started, and some of their first land mark recordings that meant so much to us back in the early 1970s. 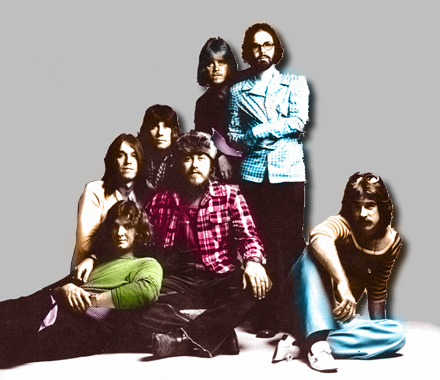 When they added keyboardist Robert Lamm (a music major from Chicago’s Roosevelt University), the group of six called themselves The Big Thing, and played top-40 hits.

Robert Lamm would go on to write many of the band’s biggest hits, including “Does Anybody Really Know What Time It Is?,” “Beginnings,” “Saturday in the Park,” “Dialogue” and “25 or 6 to 4.”  Lamm, Kath and Pankow were the band’s main composers at this juncture.

After a short time, The Big Thing realized they were missing a tenor voice (Lamm and Kath both sang in the baritone range). The voice they were missing turned out to belong to local (Chicago, IL) bassist Peter Cetera, who came into a club one night to hear them.

Peter’s trademark singing style would develop as a result of having to sing for a period of time with a wired-shut jaw after getting into a brawl at a Los Angeles Dodgers game in 1969.

Now, James Pankow, in my opinion, was one of the key members in this group. In addition to playing the trombone and being responsible for most of Chicago’s horn arrangements, James would go on to compose many songs for Chicago, including the hits “Make Me Smile” and “Colour My World” (both from his suite Ballet for a Girl in Buchannon). He also wrote “Just You ‘N’ Me,” “(I’ve Been) Searchin’ So Long,” “Old Days,” “Alive Again,” and (with Peter Cetera) “Feelin’ Stronger Every Day.”

With this talented and musically rich combination of players, the band began working on original songs.

In June 1968, they moved to Los Angeles, California under the guidance of their friend and manager James William Guercio, and signed with Columbia Records. After signing with Guercio, The Big Thing changed their name to Chicago Transit Authority.

One of the things that made this septet become so widely accepted and successful was their unique integration/fusion of rock and jazz music. On one hand there was the rock quartet of Terry Kath (lead guitar/vocals), Robert Lamm (keyboards/vocals), Peter Cetera (bass/vocals), and Danny Seraphine (drums).

On the other hand there was a power jazz horn trio formed by Lee Loughnane (trumpet/vocals), James Pankow (trombone), and Walt Parazaider (woodwind/vocals).

Their self-titled 1969 debut release was an ambitious mix of free-form rock and horn-influenced jazz, the first of three double LPs that would start their career.

Released as a double album in April 1969, the eponymous “The Chicago Transit Authority”was a very rare and risky thing to do for a first release — featuring jazzy instrumentals, extended jams with Latin percussion, and experimental, feedback-laden guitar abstraction.

Guitarist Terry Kath was the group’s leader onstage, and for many longtime fans, its musical soul. Kath’s blazing guitar work was featured throughout. He mixed blues, jazz and rock riffs throughout the double-album set.

Terry held down both rhythm and lead guitar parts as the only guitar in the band. His virtuosity as a guitarist was so strong that even Jimi Hendrix became a major fan of Kath’s playing. According to the album’s original liner notes, the solo performance of Kath on “Free Form Guitar” was created without the use of any pedals.

Their debut album garnered heavy airplay on newly popular FM radio stations at that time; it included a number of pop-rock songs—”Does Anybody Really Know What Time It Is?”, “Beginnings“, and “Questions 67 and 68“: they would later be edited to an AM radio-friendly length and released as singles.

This album sold over one million copies by 1970, and was awarded a platinum disc. Soon after its release, when the actual Chicago Transit Authority threatened legal action, the band’s name was shortened to Chicago.

The band had a few unique qualities from the very beginning. It used branding with a logo, and had a facelessness – no photos on the front of album covers. This was in keeping with the style of the 1960’s, an era that valued group effort over individual ego.

The follow-up album, Chicago, vaulted the band to popular status throughout the world. The song “25 or 6 to 4” was the first major hit single with Peter Cetera singing lead vocals. This album is also notable for featuring Cetera’s first songwriting effort, “Where Do We Go From Here?”

This period saw the release of two more albums, each lacking some of the direction and excitement of their stronger works.

“Chicago III” was notable for its variety of musical genres, with the band relying slightly less on their trademark horns. Both “Sing A Mean Tune Kid” and “Free” feature the influence of funk, “What Else Can I Say” and “Flight 602” have a country feel, while abstract qualities are found in “Free Country” and “Progress?“

The other album, “Chicago At Carnegie Hall“, had poor sound quality, was self indulgent with tunings, and long songs.

From this album, “Saturday In The Park” was a big hit for singer/songwriter Robert Lamm.

Saturday In The Park / Robert Lamm:
.

“Now That You’ve Gone” was a standout track from a performance point of view. It offers everything that is great about early Chicago. Walt Parazaider blows his brains out with a truly wonderful sax solo, rocking hard over the brass.
Now That You’ve Gone
.

As the 1970s progressed, Peter Cetera would become a more prolific songwriter for the group, contributing the hits “Wishing You Were Here” (#11) and “Happy Man” from the 1974 album Chicago VII.

Wishing You Were Here / featuring The Beach Boys:

Chicago VII also provided one of the group’s enduring signature tunes, the anthemic “(I’ve Been) Searchin’ So Long“, which started with as a soft ballad and culminated in a hard-rock conclusion featuring Terry Kath’s electric guitar soloing against the Chicago horn section and a soaring string arrangement by Jimmie Haskell.

“Happy Man,” a popular favorite on FM radio, was also a big hit in South America and subsequently covered by Tony Orlando and Dawn on their album To Be With You.

Peter Cetera’s biggest singing and songwriting accomplishment with Chicago came in 1976 with their first worldwide No. 1 single, the ballad “If You Leave Me Now.”

If You Leave Me Now / Peter Cetera:

1978 was a tragic and transitional year for Chicago. The year began with an acrimonious split with long-time manager James William Guercio.

Kath was the group’s leader onstage, and for many longtime fans, its musical soul. Terry Kath’s shocking death could have meant the end for Chicago, but encouraged by friends and admirers such as Doc Severinsen, the group held fast and soldiered on.

Donnie Dacus was hired to replace Terry Kath and the band, with producer Phil Ramone, put out the Hot Streets studio album. This was followed by Chicago 13 (no Roman numerals for this one).

By the end of the 1970s, with the rise of disco music, Chicago’s popularity declined, culminating in the release of the band’s poorest-selling album Chicago XIV produced by Tom Dowd (#71) in 1980. The horn section was relegated to the background on a number of tracks and the album’s two singles failed to make the Top 40. Columbia Records subsequently bought out the remainder of Chicago’s contract.

The second major phase of the band’s career took off in late 1981—with a new producer (David Foster). Foster brought in studio musicians for some of the sessions on subsequent albums.

Lead vocalist Peter Cetera’s desire to record a second solo album (he’d done his eponymous first one in 1981) and not continue with the band’s gruelling tour schedule caused him to leave Chicago in 1985.

Cetera was replaced in September 1985 by bassist/singer/songwriter Jason Scheff, son of Elvis Presley’s bassist Jerry Scheff, who joined the band for the final Foster-produced album Chicago 18. This album was not as commercially successful as the previous two, but still produced the No. 3 single “Will You Still Love Me?”, a Top 5 Adult Contemporary and Top 20 Pop song (“If She Would Have Been Faithful…“), and also a high-tech and highly programmed version of “25 or 6 to 4” with a concept video that got a lot of airplay on MTV.

In 1988, the band replaced producer Foster with Ron Nevison and Chas Sanford, and they topped the charts again with the Diane Warren-composed single “Look Away“, from the album Chicago 19.

The band continued in the decade of the 1990s, even though their popularity began to decline.

This group has achieved something that very few groups in the musical industry do, longevity. They have been producing music now for over 40 years, that is quite an accomplishment.

5 thoughts on “Chicago – Early Days of their Music”